I hope you are all having a lovely day/week/month! I wanted to share with you guys our Austin trip. I didn’t end up taking many pictures so I am able to get 4ish days in Austin into one blog post 🙂

We had decided to do this Austin trip because we wanted to check out the area and see if it’s somewhere we would settle down at. After a series of unfortunate/stressful events we are seeing it as signs from God that Austin is not the place for us!

We had coffee and snacks at the airport, but I only got the coffee

Even though it’s not the place for us to stay forever (I’ll never say never so who knows), it is the place for BBQ and tacos. So after getting our rental car and dropping of bags at our AirBnB we headed to Terry Black’s for brisket.

We’ve heard that Texas is “cow country” and they have the best brisket in all the land. After having Terry Black’s I do agree… 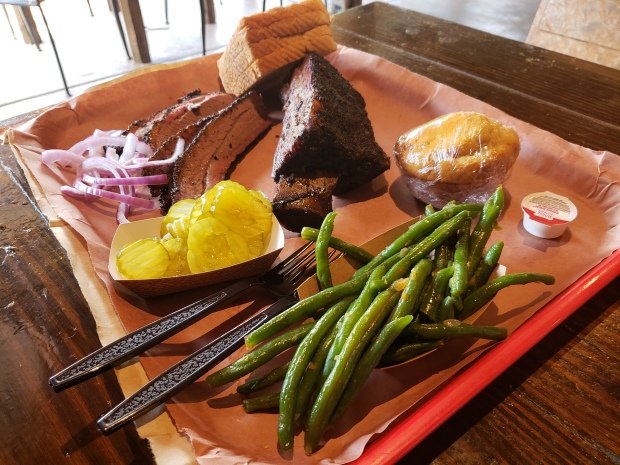 We also ended up getting this massive rib which ended up being my favorite part of the meal along with cornbread and green beans. All I can say is that all of the food was delicious. I highly recommend!

We came around 3/4pm and it was great timing because the line was short. The next time I turned around to look at the line we had gotten our food and were in the process of finding a table. Let me tell you that line was out the door!

The next day we headed into Dallas to meet up with B’s little brother and his GF. While waiting for them we (read: I) found myself getting a little hungry so we stopped by Malai. They gave us complimentary sticky rice with this eggplant sauce and we ordered the tuna spring rolls.

The tuna was seared rare and the rolls were so light and fresh! Perfect for a warm day! 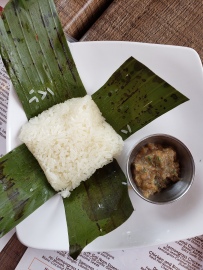 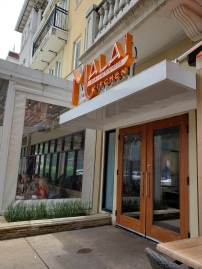 We ended up getting tacos with them at Velvet taco, but I wanted to be present and involved and got 0 pictures!

Dinner that night was kind of a fail. The hubs and I were super excited about Austin Taco Project-they had such great reviews on Yelp, but the food was not great. 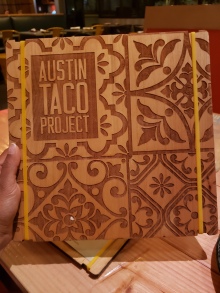 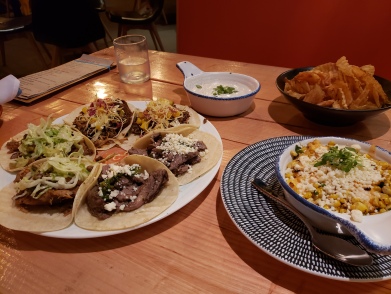 The next day we started off fresh at First Watch. When we lived in Oklahoma we used to go here somewhat often and sadly there’s not one in CA so we had to have it while we were in TX.

I ordered a garden hash with eggs over easy! I had no idea it would come with fruit and buttered toast (it had been that long since we had been). This hash is something I would absolutely get again if we had a First Watch next to us.

B got their breakfast protein (power?) wrap and it came with some fruit too. Win for us!!

We didn’t end up eating lunch since we had a somewhat late breakfast. We hit up a couple of malls and watched Ma before heading to dinner at Bun Belly. We were initially thinking pizza, but the pizza place ended up being too far from our post dinner plans so we switched it up a bit and boy are we glad!

We ordered the beef belly, the soft-shell crab, and a vegetarian one with eggplant. We also got some shrimp spring rolls to start!

The baos were so yummy too. The bun was so soft and fluffy and the fillings were so flavorful. I loved the contrast in textures with the crab and vegetarian one, but my favorite was the beef belly 😋

What I failed to mention was that before dinner we had stopped by Uncle Nicky’s and grabbed a cruller. This was one of the things I had seen on Insta before Austin and pretty much knew I needed to try before leaving. After dinner we headed back to the car and ate this and it was honestly so delicious and sweet and light. I was sad we didn’t have another! 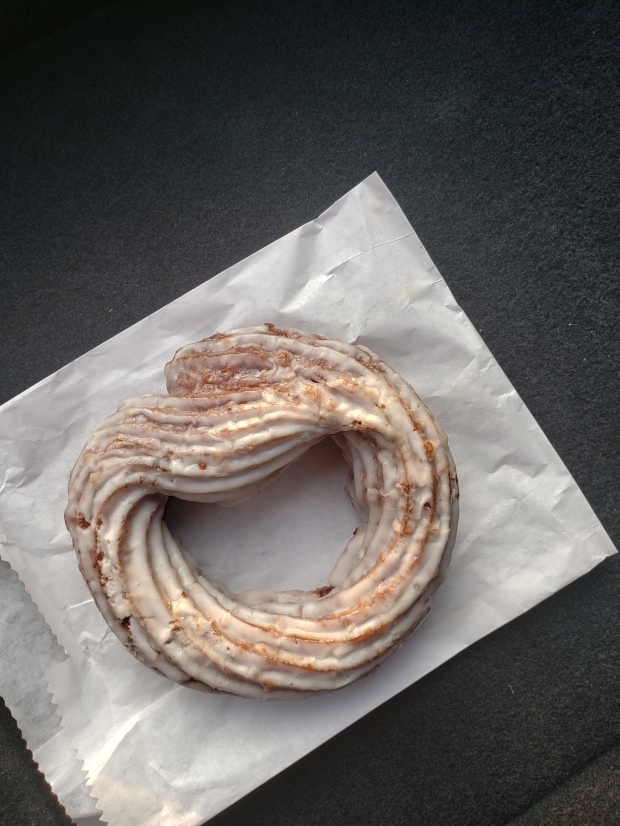 We walked around till the improv show we had bought tickets for and that pretty much concludes our last full day in Austin.

We woke up the next morning pretty excited to be coming back home. We had already decided on Torchy’s for breakfast tacos before heading to the airport so that’s what we did. 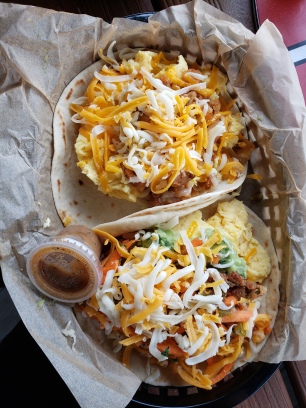 These tacos were really good, but the one I always love is The Wrangler (I think that’s the brisket one).

We had some time to kill so we mosied around the area before heading to return our rental and get on our flight.

That concludes our Austin trip! I am honestly so glad we visited Austin and if you’ve never been I think you should. Besides having great tacos and brisket they have some lovely people and it’s worth it to go for just that.

Have you been to Austin? What’s your favorite taco/bbq spot?